I was nominated for the Liebster Award by a great blogger called Mohamad.

Thank you Mohamad! He’s a great blogger that writes some interesting stories. You should check him out.

I usually tend to be quite laid back when it comes to picking movies to watch. There are some sorts that I absolutely refuse to touch (due to moral standards and such), but generally I’m not very fussy.

I LOVE a good fight scene in a movie! So love as it’s got great tension, great music, and the villains get their butts kicked, I’m hooked! Examples of movies with the best fight scenes ever are:

I can’t think of anything else to say that I haven’t said before.

What is your favourite food?

I believe I’ve answered this one before.

What country are you from?

Yes, I know that’s not a country. That’s the point.

Don’t really have a preference.

If you could change one thing about yourself, what would it be?

I don’t think I’ve had that question before. Great question.

And that’s relevant to you and everyone else reading this how?

Are you an introvert or extrovert?

That’s for you to work out.

I don’t. I will occasionally go and read it, but I don’t actually follow.

If you were a drink ( alcoholic or non-alcoholic) what would you be?

Actually, this is the most original question I’ve ever been asked in an award post. This is a hard one to answer. I would be something sweet but spicy at the same time – i.e., I’m sweet and cute but can (and WILL) be quite ferocious – so, I’d go for…I’m actually not quite sure. Something sweet and spicy.

Do you believe in after life?

Do you believe in karma?

I’ll explain karma for those who may not know what it means. Karma is basically cause and effect. I.E. Some things happen that are a direct result of your actions. Or a better and more simplistic way of putting it is: You reap what you sow. 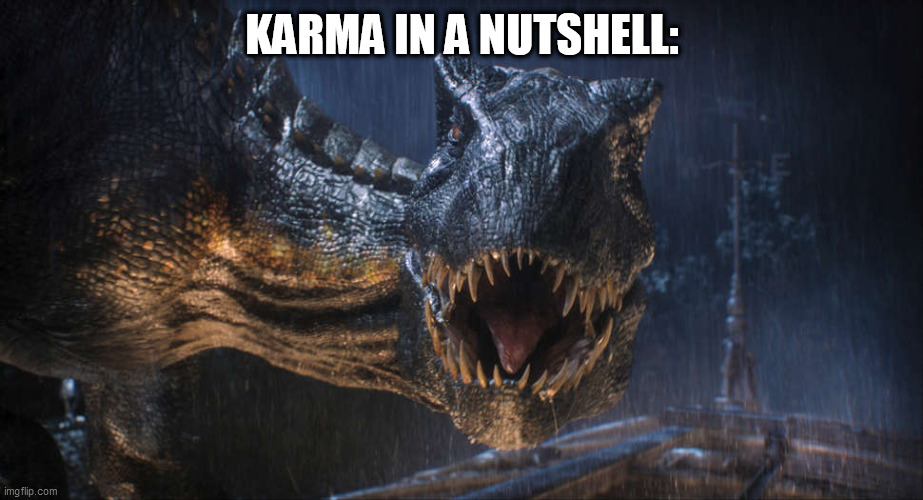 (Yes, I created that meme).

So basically, yes, I do believe in karma. Whether it’s immediately or in the way we expect, what we do will come back to bite us if we’re not careful and not doing the right thing. Your sins will find you out. You reap what you sow. If you do a good deed, say a kind word, or something else that is good, it will have an affect, whether it’s noticeable and if it is, it will have an affect whether we realize it or not.

For example, let’s say you are going somewhere and you have this feeling – a gut instinct, that little voice in your head that tells you right from wrong – that you need to go up and talk to this person that you just saw for the first time. Just generally chat or say something in particular that you feel you need to say. You may not know why, but you better do it because there is a reason for it. It could be that person is depressed and be thinking of suicide or is struggling with some other sort of problem and if you follow that gut feeling, what you are feeling to do – going up and chatting – could be what prevents them from doing what they are doing. We have no idea, or refuse to think about it, but words do have an effect. They are POWERFUL!!!! Life or death IS IN THE TONGUE, and we refuse to think about it. We brush it off, thinking it’s of no consequence BUT IT IS!!!!

You may speak with no intentions of evil, but something evil can still happen from it, which is why we must guard our mouths.

I know this from personal experience. Stuff some people said to me sent me into a depression and got me feeling suicidal at one point. I never actually tried to commit suicide, but I felt like doing it for a long time. I wasn’t bullied, if that’s what you’re thinking, but the stuff the people said hurt enough for that to happen. Looking back, I now realize that the people meant no harm and some of it was just said in the heat of the moment, but it’s why we need to be careful.

So, despite that saying, words do hurt.

And they DO have an affect.

I’m sorry, I’m tired. I can’t think of anyone else to nominate right this second, so anyone else who wants to do this, go ahead and do it! You are nominated!

And I’ll be passing along the questions I got as it’s after midnight and I’m tired.

Have a great day/night!